Coming from a country where city cycling is associated more with a leisure activity than a means of transportation, I must admit I was intrigued to understand how Copenhagen, a front-runner among high-cycling cities, got to where it is today – a place where even its ducks would bike if they could hold the handlebars. When I relocated to this smart city that features what looks like daily marches of comrades-in-wheels and is highly praised for its bike infrastructure, I went weak at the knees – like, literally. I was now living in this bike city haven, and the only pedals I’d successfully used before were the ones of a piano. I just couldn’t ride a damn bike. Fast forward a few years (yes, it took years), I can finally attest to the power of peer pressure. Not only am I now sitting tall – if still a bit wobbly – in the saddle, but I also know much more about how cycling culture can change a city, as well as its inhabitants, including myself.

The rhetoric on the development of cycling culture has shifted through time, from a matter of ideological discourse and protest, to a cheap transportation solution in times of financial hardship, so it could finally become today an integral part of any recipe for greener, smarter, less traffic-congested cities.

Throwback to the first wave of city bikes 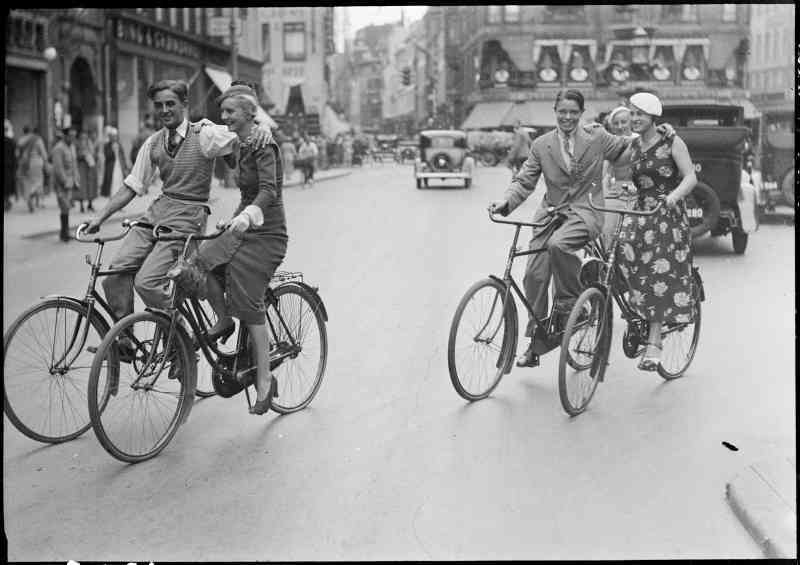 In their quest to foster a cycling culture, most municipalities bet on the implementation of bike share schemes as a way to increase bike utilisation fast. Some succeed, others don’t, but what is clear is that, to understand how city cycling became a phenomenon, I had to trace the history of the concept of bike sharing.

What was basically a guerrilla tactic used by some Dutch anarchist activists in their fight against the “gaudiness and filth of the authoritarian car” in the 60s turned out to be the birth of the modern concept of bike sharing. The first shareable city cycles were white and left unlocked on the streets of Amsterdam for anyone to use. You can guess what happened to them, right? The bikes got stolen and not that many people converted to cycling. But it wasn’t a total failure, because it inspired Copenhagen to take a shot at the idea, with a slightly improved setup that allowed riders to access bikes through a coin-operated system. Still, that wasn’t enough to get the city cycling, and it was not until the late 90s that a French city introduced the first bike share system that could actually scale city-wide.

From then on, similar programs started running worldwide and city cycling became a common conversation topic in the larger discourse of providing accessible and reliable public services for citizens. New York, Chicago, San Francisco, Montreal, Paris, London, Barcelona, Valencia, Buenos Aires, Mexico City and Hangzhou are just a few of the cities that are investing in extensive bicycle fleets, proper bike infrastructure – though with varying standards, the latest technology available, and ample PR campaigns in an effort to make cycling a part of the city’s identity and culture. People even went as far as connecting the idea of city cycling with the ultimate reward – happiness, the best example of this being, of course, Copenhagen, where traffic planners decided to widen bike lanes when they discovered that people couldn’t ride next to each other and chat on their morning commute.

But wait, pull the brake for a second. So am I to believe it’s enough to tell people cycling makes them happy, and they’ll flock gleefully to pedal against the cold winter breeze in their freshly ironed business suits? To discover the secret ingredient for Copenhagen’s city cycling mania, I had to take a closer look.

Getting on the right (bike) track – Copenhagen and city cycling 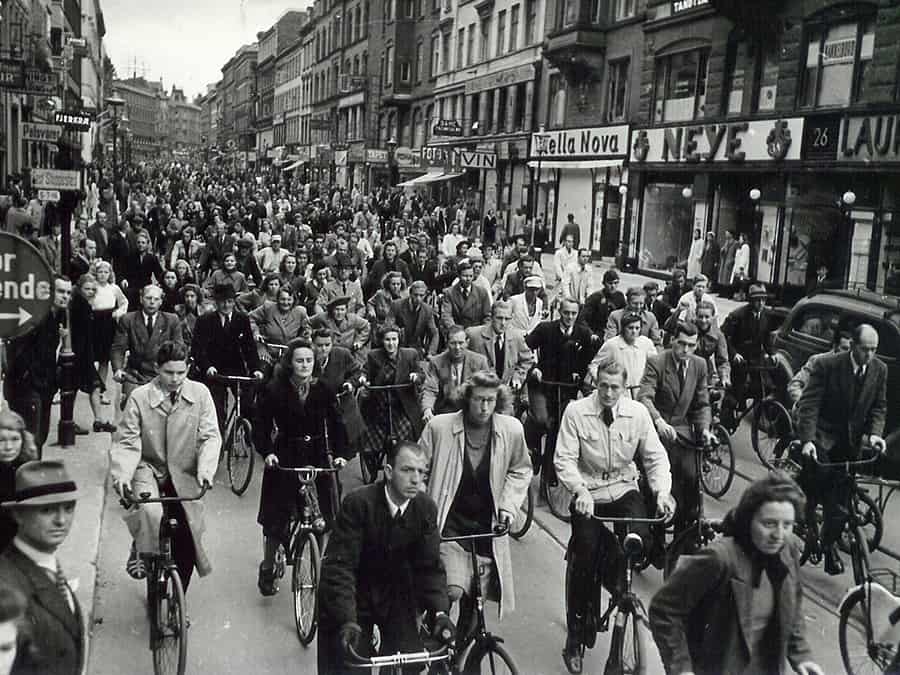 The simple commuter’s life about 70 years ago. Photo

Bikes in Denmark’s 19th century were popular because they carried the idea of “a good society”. Cycling was both fancy and convenient everywhere in the world, for that matter. But then came the 20th century and put everyone in cars. Most urban centres around the world changed to facilitate motorised transport, and so did Copenhagen. It stayed this way until the energy crisis hit in the 70s and people had to think of practical ways to get by – and around. The bike was an obvious solution, but that wouldn’t have been enough to make cycling popular, easy and – most importantly – safe. Compared to other places in the world, the cycling unions that had formed in Denmark didn’t merge with sports organisations and kept cycling from becoming an activity reserved to an exclusive, latex-loving and athletic group of people. It was all about that important ingredient that makes any collective movement possible – social inclusion. That’s what made it easy for cycling communities to build a serious following, get a strong voice and gain political support, so they could successfully push for the bicycle as a cheap and convenient means of transportation when it was needed. They protested, asked for the right infrastructure and traffic regulations until they got them. Sure, it also helped that there was no national automotive behemoth to stand against them. The long-lasting results of this? Numbers speak for themselves:

Bike is the new black

So yes, when cycling is a fast, cheap and safe means of transportation, more people are encouraged to saddle up, even when it’s too cold or too warm, too hilly or steep. Even when you have a super important business meeting, 3 kids to pick up from kindergarten, 2 grocery bags to bring home or even a coat rack to move. Once that is the norm, making city cycling ever better is just a matter of smart investment, and it becomes an obvious part of what makes a city liveable and sustainable. Also, it ends up looking like this:

Morning Ebb And Flow from jim slade on Vimeo.

But above all considerations about innovation, sustainability or solving an increasingly global problem of suffocating traffic congestion, do you know where I see the success of the cycling culture? I see it in myself, this girl who successfully failed to learn how to bike four times before and was always scared to saddle up, now riding a bike I rented so I could join my friends downtown – duh, of course they’re all biking. And as I pedal up and down the streets of Copenhagen, I feel not only perfectly safe, but completely free and excited about discovering a new city around me, one that was shaped for me to enjoy it.