However hard it may be to admit, summer holidays are kinda over – at least on the side of the world I’m biking in. I like to think that, in part thanks to Donkey Republic’s bike rental platform, more people explored new places from the saddle this year. Most importantly, however, I hope more people went home from their holidays thinking “How cool is this casual cycling thing!? I want to do it again”.

The road from that exhilarating thought to actually getting to cycle on a regular basis, easily and safely, may not always be paved with good, uhm, bike lanes. Even though I live in an alleged urban cycling utopia – i.e. Copenhagen, Denmark – I am aware of the challenges it takes to build a strong cycling culture and the right bike infrastructure at a global scale. That doesn’t mean, however, that there aren’t a lot of great things happening all over the world which, through cycling, help transform our cities into environments we enjoy living in. We should promote and celebrate those more, I think, because we rarely realize how close we are to making a real change, if only we made our voice heard a bit louder and our bikes seen a bit bolder.

So, without further ado, here comes a list of 10 random, but encouraging things that happened for the advancement of urban cycling in the past year:

Central Paris lived its first ever car-free day last September – if we don’t count the times when cars didn’t exist, of course. The French seem to have liked it, because this September they went sans voitures again, this time for a much larger area of the city (650+ km of road).

7 Cycle Superhighways are now operational in London. Despite all the controversy involving their construction, they have already proved to get much more people on bikes in the areas they were built in. As an example, the number of cyclists using Vauxhall Bridge since Cycle Superhighway 5 opened has risen by over 70%, a Greater London Authority report stated.
Also, just look at glorious picture of British commuters cycling in the morning rain:

Wet morning commute. No-one will be using that cycle superhighway then! pic.twitter.com/sKUTG7pDz3

IKEA decided to get in on the fun and created their own bike! Of course, you need to assemble it yourself, but once you figure that out, it’s perfect for carrying all your other IKEA shopping bags; just maybe hold back a bit on those meatballs before the trip home.

The bicycle-car looks neither as weird as all those velomobiles or as prehistoric as Fred Flintstone’s car. It’s actually pretty cool, and can potentially make all your excuses for not biking during winter redundant.

The Brompton Urban Challenge made it to its second year

20+ cities are participating in the coolest cycling competition this year. I particularly love this one because it combines urban cycling with city exploration – and you know that’s what Donkey Republic is all about *wink*. There are still upcoming dates for the event in several cities you might just happen to be in. Check them out on Brompton’s website.

Bike advocates around the world celebrated 42 years since the first ever Ciclovia event took place in Colombia. Ciclovia has become a popular international event that involves blocking cars from the streets and opening them for cyclists and pedestrians every Sunday, in numerous cities around the world. It has also inspired many similar initiatives that promote cycling and object car supremacy in our urban environments.

P.S. If only Don Pablo had decided to be a trailblazer by channeling a different vocation of his: 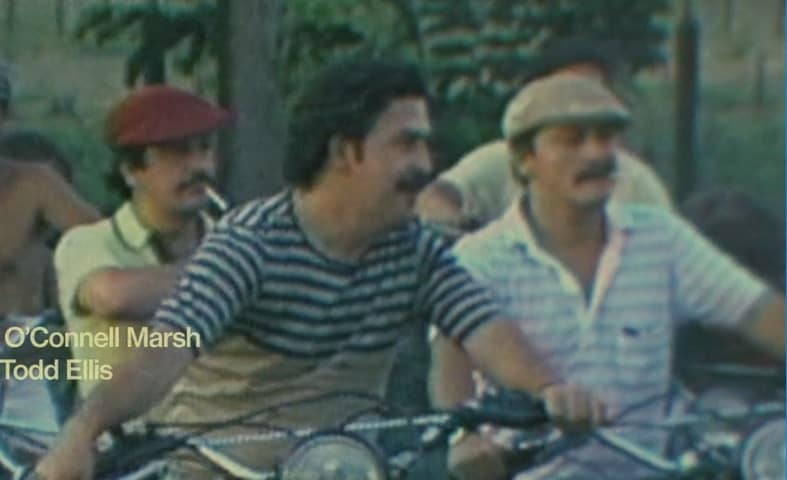 P.P.S. I know he actually rode minibikes, not bicycles – but imagine how much fitter of a drug lord he would have been if he chose to pedal instead.

These lanes are important because they separate bike and auto traffic and therefore increase cyclists’ security and comfort as they ride. The US has been lagging behind other countries when it comes to adequate bike infrastructure, but things are changing, and Portland’s decision to only build protected bike lanes is particularly significant when you take into account that the city has been dubbed America’s Best Bike City for a while now, inspiring municipalities across the country to replicate its success.

This guy broke the internet, but – somehow – not his back

If he managed to do that, there are few acceptable reasons why you shouldn’t be able to just saddle up and start rolling.

The first Radschnellweg opened in Germany

This bicycle highway connects the western cities of Mülheim an der Ruhr and Essen, and is just the first part of what’s going to be the largest bicycle highway in the world: 62-miles long, connecting 10 cities and 4 universities.

People for Bikes launched The Big Jump in the US

This is a very cool urban development project through which the American NGO plans to help 10 communities connect isolated bike infrastructure efforts and create convenient cycling networks. Apart from being a very good initiative in itself, it’s also a reminder of how successful their previous project was: the Green Lane Project.

That’s my list. There are so many more cool things happening all over the world in terms of urban cycling. Still, I don’t want to keep you too long in front of a computer, when you could be out enjoying your surroundings on a bike, while at the same time being part of what’s going to revolutionise urban mobility everywhere. Because there is virtually no place on Earth where we can’t find solutions to bike our way towards a better future.

Not even in the Amazon forest:

Not even somewhere in the Albanian mountains, sharing the road with goats:

Not even at the frickin’ South Pole:

You get the drill. Go out and bike!