When you first come to Denmark, unless you are from Amsterdam, the bike traffic might scare you a bit, but there is no need to panic. While it makes complete sense if rush hour can be a tad intimidating, it really isn’t so bad. However, if you are a tourist, you may want to avoid certain stretches during rush hour, such as Jagtvej or H.C. Anders Boulevard. But after nine in the morning, you should be fine to head out. Ergo; spend the morning eating brunch or staying under the covers.

And when you decide to venture out onto the streets, be aware of these few rules, that will make your life so much easier.

Let there be light: Proper bike lights is a must or a fine is coming your way (700 DKK, ouch!). When I say proper, I mean there are requirements. So pay attention, as not all lights are approved by Danish government: they must be seen from 300 m distance; they cannot hang or dangle, and must be fixed on the front (white) and the back (red), and should be noticeable from the sides as well (also, must provide you with superpowers). You can buy (relatively) cheap lights in 7/11, which are placed all over Copenhagen.

Turning: When turning left at a crossing most of the Danes use the so-called Pedestrian Style: cross the road alongside pedestrian crossing, and stop at the end of it making a small left turn so that you’re facing the direction you want to go (make sure to not stick out too much, otherwise you will be blocking the bike lane or can even cause an accident. A big no no). After that, just wait for the light to turn green. It is a good thing to raise your hand up before performing this act to inform cyclists and cars behind you that you will be stopping. Raising of the hand is a general stop sign, so keep this one in mind. Oh, and turning right requires to stick out your right hand to the side. Easy breezy. 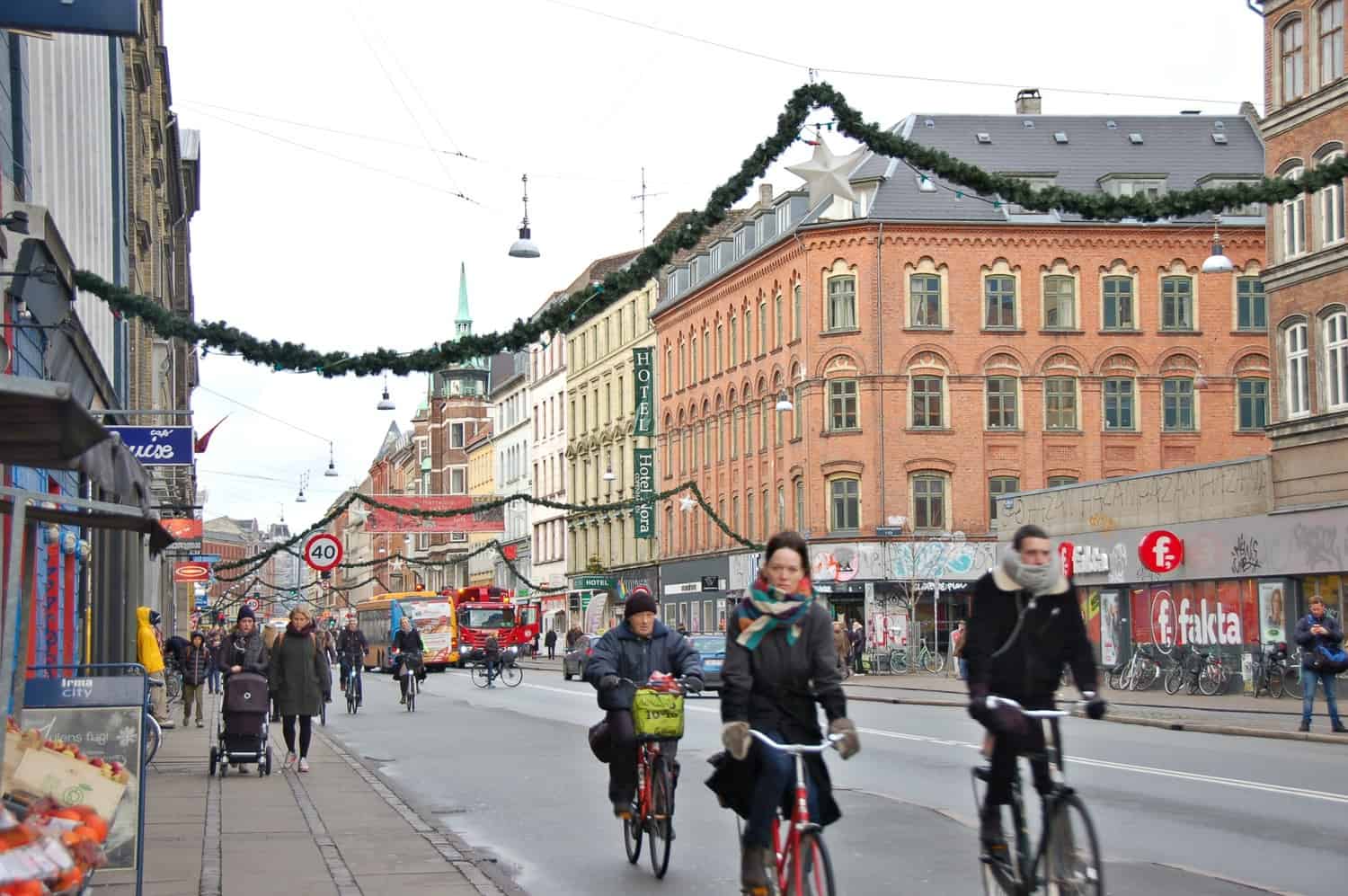 Positioning: Stay on the right side of the lane unless there is a need to pass someone riding slower, and before you do that, check if there is no one else already passing behind you. In some places it’s super easy because the bike paths are wide (like Nørrebrogade), but in other places like Gl. Kongevej it’s important to be aware of this.

Tie up your laces: Because if loose, these naughty things like to wrap around a pedal stick, and then Booom! Same goes for your trousers, long jackets or anything else that might go straight into the wheel. Luckily, bikers in Copenhagen are super nice to each other, and often other people will tell you while you’re stopping for a red light if they notice something’s up. Once a girl behind me said “Hey – it looks like you’re wheel’s about to fall off”. Well, thank you for sharing that. 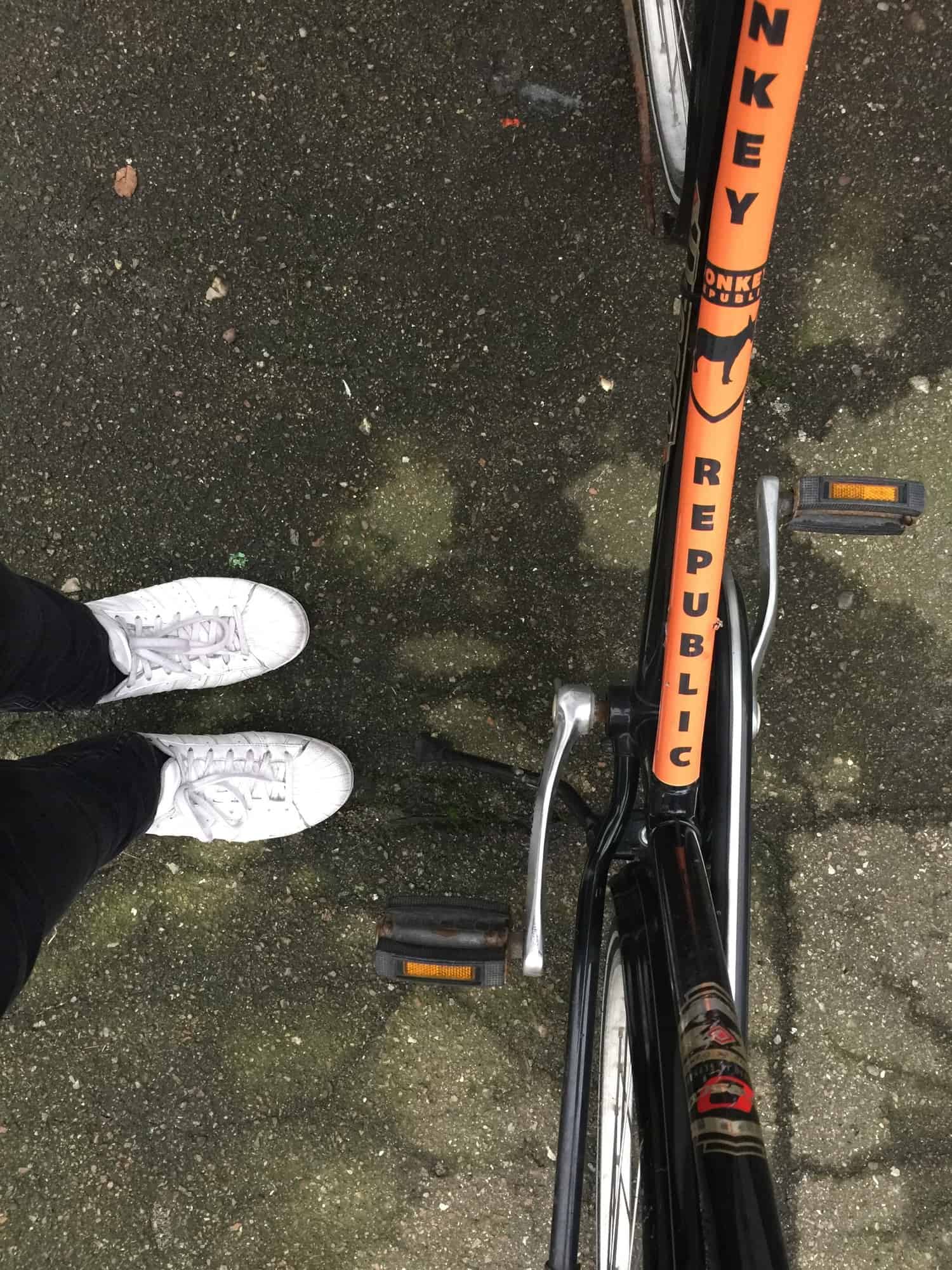 Ring that bell: Although it might feel a bit rude sometimes, it’s all for the sake of safety. If someone’s in your way and might not notice you coming, it is better to let them know you’re close than to later recover from an accident. So ring that bell all the way down Østerbrogade.

Raise your hand: No, this is not a round of Q&A. It’s the last piece of advice before you head out onto the streets. One of the most important things to remember is that when you stop, you absolutely must raise your hand to let people know. Let’s say you see something nice in a window and you want to check it out – that’s fine. Just make sure you raise your hand first, so that you don’t create chaos due to a nice top.

Basically, what all newbies need to do is to watch cyclists around and mindfully follow the crowd. After a little while it all becomes automatic, but the key to safety is to never relax too much. I think that common sense and respect is very important and makes a huge difference on the streets of Copenhagen, so hold on to that guys, and you’ll be fine.

Now, you have a working bike and a bunch of basic rules, it’s time to enjoy some sightseeing on two wheels!